As fall begins in 2016 we are still feeding the bluebird family of five (see essay “A Western Bluebird Bonding”), as well as all the other birds and lizards we normally feed, and I am thinking a lot about wether or not the Hermit thrushes, Patience and Agro ( see essay “Theatrical Thrush”), would return this year.  Birds will return to the same area to nest and also to winter if things were good for them before.  I was really looking forward to seeing them again–well Patience anyway.  However, before the thrushes arrived, we had some return visitors from last winter.  A small flock of five white-crowned sparrows and six dark-eyed juncos showed up for the winter. Hey, that’s why I live here, it is dam nice in the winter.  I had fed small flocks of both the white-crowned and juncos last winter.  The neat thing about both these species is that they are primarily seed eaters, which means that I could use pieces of walnut to entice them rather than live giant mealworms.  It is a lot less expensive and the bluebirds would get all the mealworms anyway.  The bluebirds pay no attention to the nuts.  I have also been using dried mealworms for our year-round birds, however I wasn’t sure if the winter arrivals would be attracted to them.  As the winter birds would forage around us in the yard I would toss out small pieces of walnut. 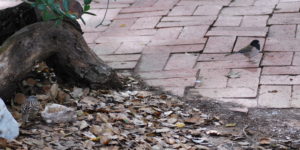 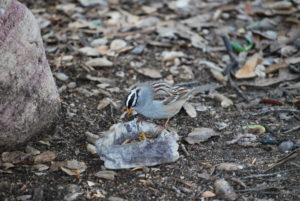 The birds quickly focused on me tossing out the walnut pieces and came in closer.  This led them to discover the dried mealworms we put out when we are outside, well at least the white-crowned sparrows noticed them.  To my amazement the dark-eyed juncos never showed an interest in them at all.  Maybe they were a little intimidated by all the action around the feeders. 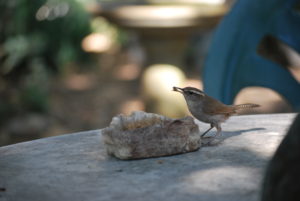 Besides the five bluebirds, we are feeding two California towhees, two oak titmice and we picked up a Bewick’s wren recently!  Add the eleven new visitors and that is a lot of birds vying for food.  I decided to put out three dried mealworm dishes instead of the two I had been using in order to help out with the congestion around the feeders.  I put two feeders on the ground and one on the table with us.

I must mention that we put out the dried mealworms slightly moistened.  The reason for that is to make them less brittle and easier for the adults to pick up and feed to their young without them breaking up and falling out of their mouths.  We actually call it bird kibble.

There is a pecking order as to who gets to eat first.  The bluebirds are the most aggressive because of their flying ability and their numbers.  However, one on one, the towhees tend to rule the roost, so to speak.  Who I found to be pugnacious little birds were the white-crowned sparrows!  They would stand up a little to the bluebirds and towhees.  Not so with the titmice, they are scared of everyone!  I make sure to toss the titmice food that they can get to when the feeders are busy. 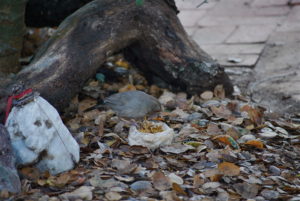 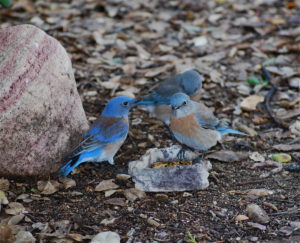 Part of the bluebird family

As all these birds are settling in with each other my thoughts turn to the hermit thrushes from the previous year, Patience and Agro (see essay “Theatrical Thrush”).  If she even comes back, would Patience come flying to my hand again?  After a few weeks of starting to feed the new arrivals, I spy a hermit thrush on the rocks next to me by the table. Could this be Patience?  I pull out a live giant mealworm from the container and offer it to her by hand and she immediately flies over and takes it from my hand!  “Patience” I cry loudly, “you’re back!”

Over the next couple of days Patience and I renew our friendship.  Then one day I have a hermit thrush on the rocks by the table who won’t come to my hand.  Could this be Agro?  This bird was very familiar with the routine of me tossing worms out, however, he will not fly to my hand for one.  That was the same pattern last year with the thrushes. Last year Agro would chase Patience to the southern side of the house and I would have to feed her there.  I leave the table on the northern side and go around to the southern side of the house.  Lo and behold, there’s Patience waiting to be fed!  She flies to my hand for her worms and then goes on her birdie way.  I knew in my heart that these were the same two birds from last year but I wanted more proof of that.

The only difference between the birds that I could discern last year, other than behavior, was that Agro showed a lot more white underneath his cheeks than Patience had.  It was quite reliable as I always knew which one was which.  I had taken many photos of them last year and I realized that I would be able to compare them to this years photos. 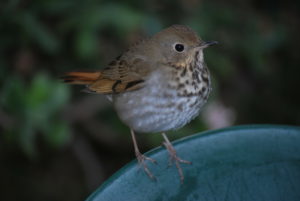 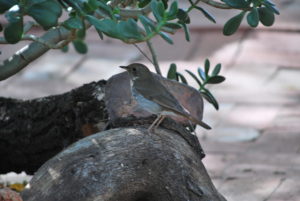 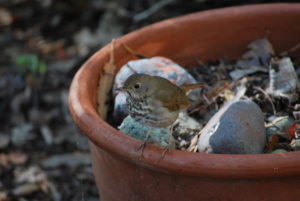 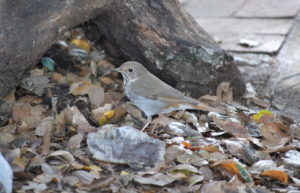 As you can see, the white on Agro below the cheek is far more prominent than on Patience.  That clinches it, these are the same birds!

I find it so wondrous to be able to establish a relationship with any wild animal.  My feeding by hand, either tossing out or by hand, has broken down most of the fear that these animals have for us.  Even other animals that we do not directly act with see the behavior of the birds towards us and accept us a bit more also.  Because of this lack of fear, even when I am not feeding them, the birds will come in extremely close looking for food.  They will actually come in closer than when they are being fed.  This lets me see their behavior up close and personal such as the time early one spring when two towhees were exchanging twigs while making some soft little calls to each other.  That was obviously a bonding ritual for the towhees.  I had witnessed it once before, many years ago, without being able to hear the calls because they were not close enough.   Feeding by hand has proven to be a great way to establish a real bond with the animals here. I will go out in the morning and again in late afternoon to give them a feed.  During the rest of the day the birds will come by while they are on their territorial excursions to check for food.  Some of them seem to beg for food by singing to me or coming in very, very close.  Tow Tow, our female towhee, will be up on the table, which is where she normally takes worms from my hand, right in front of me a foot and a half away!  My wife and I have noticed that she has quite the stare.  If there is no food available the birds go on about their foraging ways. Heck, I’ve even seen them walk away from food on the table and just start searching for more in the leaf litter.

Feeding the birds by hand has been such an incredible experience for me.  It brings much joy and entertainment to my day.  You should try it. I know you’ll like it!