Early spring of 2016 brought a mated pair of western bluebirds to our yard.  Bluebirds eat insects by catching them in the air or by following the insects to a landing spot on a plant or on the ground.  They often come to the ground when they spy insects from the perch they are on.  Bluebirds are members of the Thrush family, which do happen to spend a lot of time on the ground.  It was this behavior that showed me a way to get their attention with:  “The Power of Mealworms!”  My essays are full of my stories on feeding birds and reptiles and how that affects their behavior toward who is feeding them.  They lose their fear of you.  I start by throwing out large, live mealworms onto the ground where the animal can see them.  The worms wriggle a little and the predator comes on over to snatch the worm up.  Works every time.  The most important things in an animal’s life are food, water and shelter.  The birdbaths bring the birds into the yard and the worms bring them to me!  The habitat was already here.  So now, the birds are focussed on me after only a few worms–“Hey, these Homo sapiens are OK!”  From there it was easy to get them to feed at the table. 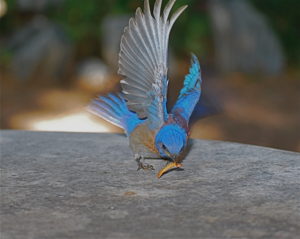 The male bluebird snatching up a worm on the table.

The birds would alight on the chairs at the table and fly in for the worms that we would toss onto the table for them.  What really surprised my wife and me was how quickly they learned to take a worm from our hands, in only three days!  We have fed lots of birds but very few will take from our hand.  It’s usually a toss out to them.  Oh, I should mention that we also throw out pieces of walnut to the seed eaters, although they do love mealworms best.  Previously we have had only a California towhee and a hermit thrush take worms from our hands (see essay ” Theatrical Thrush”).  The lizards of all species run over to you like puppy dogs to take worms from your hand.  They are a kick! The birds, they seem more wary.

Pops coming in for his worm. 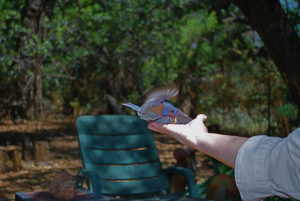 When the bluebirds arrived as a pair I was trying to think of a famous couple from history that I could name them after.  At this time we were also feeding two pairs of California towhees.  One morning, when I was tossing worms to the towhees that lived east of us, the male bluebird flew down to land close to the towhee that had a worm in its’ mouth. He then hoped over and took the worm right out of the towhee’s mouth and flew off with it!  I thought, “That’s it!  I’ll call them Bonnie and Clyde!”,  although, in all honesty, I usually just call the male Pops. 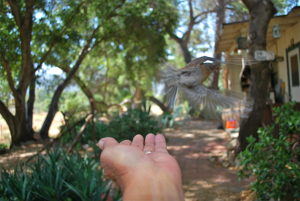 As nesting season draws near, Clyde is compelled to start feeding Bonnie.  He will also be feeding her when she finally has eggs in the nest.  He will actually fly in from further away to get to a worm before Bonnie does, only to end up giving it to her.  That’s testosterone for you; it makes males do some crazy things.  Anyway, come nesting season they chose a hole in a tree, being the cavity nesters they are.  The particular cavity they chose was one that our oak titmice used in 2015 to fledge three young. 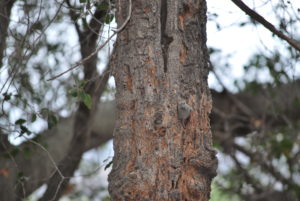 Titmouse peering out from the hole in spring of 2015 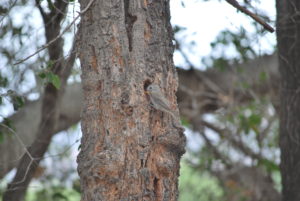 Titmouse entering with a load of worms in 2015.

This is way cool because I can view them from where we sit at the table.  At this point we added some dried mealworms to their diet.  We put out the dried mealworms in a container on the table and they quickly learned to take the worms from there, not that we stopped feeding them live ones by hand. 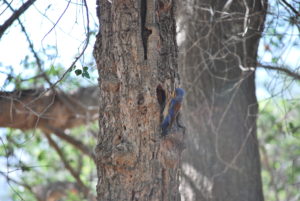 Pops bringing worms to the hatchlings in 2016

Soon they were taking worms to the hatchlings in the nest.  This went on for a few weeks until the hatchlings fledged.  At first the parents kept the young up in the foliage of the oaks for safety until they could fly better.  When they gained some flying competency they began to follow their parents around. 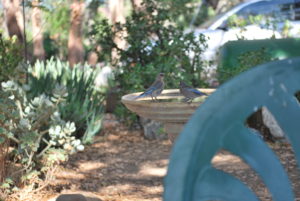 Mom with one of her young.

The young would follow the adults in, closer and closer to the table, until they were being fed by the adults at the chairs.  As the time for the fledgelings to feed on their own arrived, they had become very accustomed to the situation.

We were really happy about our decision to include dried mealworms in their diet.  It makes it a lot easier to feed them all.  The parents had fledged three young consisting of a female and two males, so there were more mouths to be fed and we were still feeding all the other birds, as well as the lizards.  Soon we were all a big happy family at the table! 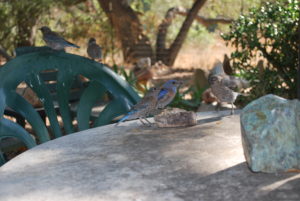 The Bluebird family in spring of 2016.

We fed the family all through the summer and as fall approached I wondered when they would push off the young to other territories, as is the case with most birds.  They had their adult coloration now and it was getting hard to tell them apart, although Pops showed a little more cobalt to his color.  Since I am writing this essay way after the fact, I can tell you that the adults did not chase off the young until late January the following year.  It was incredibly fun and interesting to be interacting with such a fine family of bluebirds!  However, it can get pretty crazy here at feeding time!  There are a lot of mouths to feed and timing is crucial in the feeding sequence so as to keep the more aggressive ones from getting all the food.  And that means between the different species also.  I would have to feed the bluebirds first, since they are bold and aggressive and would take the worms before the others would get them.  Then I would quickly give handouts to the other birds while the bluebirds were occupied.  I have had times when I was holding a worm for another bird and Pops would fly in and snatch it from my hand before I could react.  I really had to pay attention as to where all the birds were.  I leave you with a photo of little Bonnie that I thought was nicely done.  Tribute must also be paid to Clyde for all the bugs he found and fed to Bonnie and their youngsters–what a Dad he was! 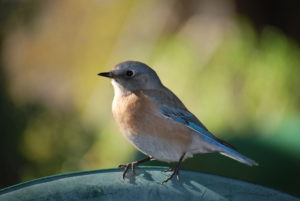