In a previous post, “Fattening Lizards for the Snakes,” I talked about a few of the reptiles that we have including the western fence lizard, southern alligator lizard, gopher snake and common king snake.   I have also had the good fortune to have a couple of first sightings of reptiles here in my little paradise.  One day, while I was raking up oak leaves at the edge of the driveway, what looked to be the lost tail of a lizard wiggling about on the ground (some can shed them to get away from predators) turned out to be something else!  I had thought that I had caught a lizard with the rake and its tail was squirming around.  One problem though, what would be the broken end kept moving around trying to get under something!  Further inspection showed that it was a baby California legless lizard! 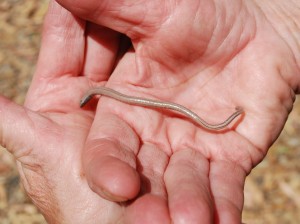 Adult legless lizards are between 4 1/2 to 6 1/2 inches.  The first I ever saw was here when we first moved in and it was a full blown adult about as fat as my pinkie.  I have seen one other at this location and it was between the previous two in size, and it was dead. They slither around in soft sand and leaf litter in moister areas around us.

The other first sighting was of a western whiptail juvenile.  I was very aware of the California whiptail and when I first saw this lizard I think I may have written him off as a western skink juvenile, due to the blue tail.  I was editing and cataloging some reptile photos one day when I came across this photo below. 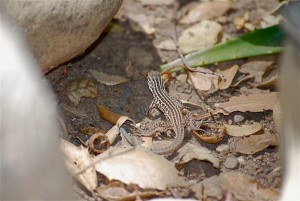 Whoa, that is just way too many stripes down its back for a skink I thought.  So to my reference manuals I go. 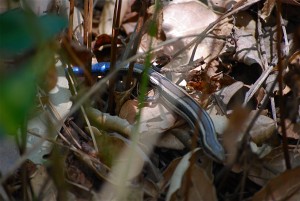 See the difference?  And it is surely not a California whiptail.  Bingo, new reptile, western whiptail!  I don’t recall ever noticing this lizard before anywhere else.

One species that I have seen very little of before and have had sightings of here of is the brightly colored ringneck snake. 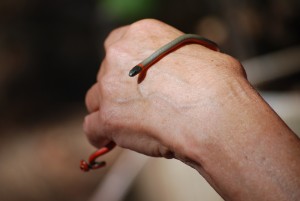 Ringneck snakes forage in the leaf litter and under logs for salamanders and other small reptiles and large insects.  They are not often seen.  They grow to 10 to 30 inches, although the few that I have seen have been less than two feet long, as is this one.

My favorite lizard by far is the California whiptail, for a few reasons.  First, they are very active and easy to observe.  They are also very bold and aggressive.  And last, they move with a gait that is very different from the other lizards, it is kind of slinky.  It also is one of our largest lizards. 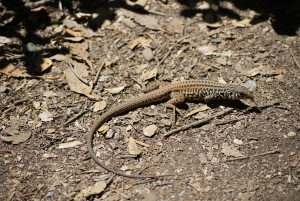 Given their boldness they are easily trained to take meal worms from my hand.  Although all the lizards learn very quickly to do so, the whiptails seem to come over and beg for food. 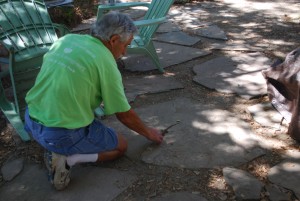 Me feeding a California whiptail.

Last summer we had a whiptail coming around a lot to feed which I named Slinker, for the way the whiptails walk.  Slinker was down at my feet where I was sitting, ” Birding Table-North Yard” where I always sit, begging for more food.  I had the thought that Slinker might be aggressive enough to jump for his meal!  Holding a meal worm up so he had to leap to get it, he did! 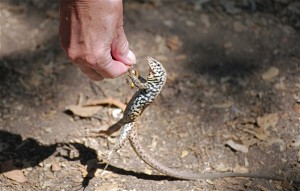 A California whiptail leaping for a mealworm. It knocked it off and picked it up off the ground. You can see the worm between his arms. 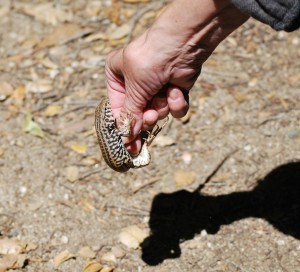 A California whiptail on my wife’s hand.

Once we all got our timing down Slinker became extremely adept at snatching the meal worm from our hands.  It became a great game for us, well me anyway, and he got some great food so I’m sure he was happy! 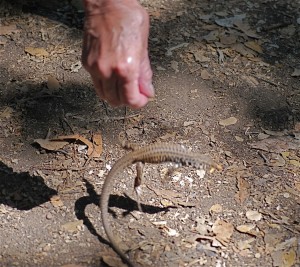 A California whiptail dropping off with a worm in its mouth.

After feeding him for several weeks he was gone.  I do see California whiptails from time to time so I will be sure to try this again!

A southern alligator lizard I named Big Red once ran about 15 feet over to me for a worm and western fence lizards will also often run up to you for one, however, Slinker has really amazed me!  I had the odd thought that I could change Slinker’s name to “Leo the Leaping Lizard” and take him on tour but he wouldn’t sign a contract.  Can you believe that!  After all those meal worms, he has to be kidding,right?

Fattening the Lizards for the Snakes
A Gopher Snake Saga