In a previous essay, “Predators and Prey,” I mentioned some of the mammal predators that we have and in this post I will focus on snakes, specifically gopher snakes.  There are no vegetarian snakes, all are predators.  And just like the other predators they focus on the ground squirrels.  While the smaller gopher snakes will eat reptiles ( see “Fattening Lizards for the Snakes”) and mice the larger ones want larger prey. 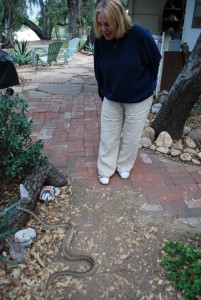 My wife with a snake full of ground squirrel. It’s probably 4 feet long.

We all know that snakes can swallow prey much larger than its head.  Mostly because of its stretchy skin and dislocating jaw.  However, I find it pretty amazing just how far that can take them.  In the photo on the left my wife is gazing at a good sized gopher snake, close to four feet probably, with a baby ground squirrel in it.  We had a preponderance of baby ground squirrels the spring of 2013.  They were jumping all around their burrows when they first started to emerge and that lump in the middle of the snake is the perfect size to be one of them.

Most animals have a certain size limit they will achieve based on their species.  Snakes however can continue to grow their entire lives.  This is the saga of the largest gopher snake that I have had the good fortune to see. 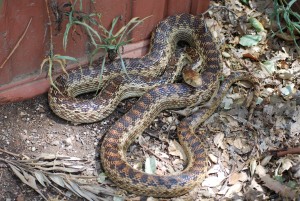 The largest gopher snake I have seen at a full five and a half feet.

I came upon this snake when I returned from errands one day in spring of 2009.  It was out in my driveway headed for my neighbor’s driveway.  My neighbors were out at the time and I did not want the snake to be run over so I moved it to the east side of my north yard along the fence and sat down at my table there. 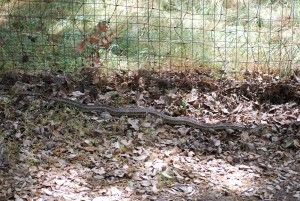 I fully expected the snake to head off into the east pasture, especially because of my handling it when it was moved. Instead it came right down the fence line, inside the fence line!  Even my walking around him for photos did not deter it. He seemed extremely determined in his quest and I thoroughly enjoyed watching him come through the yard, not to mention all the great photos that I was getting. 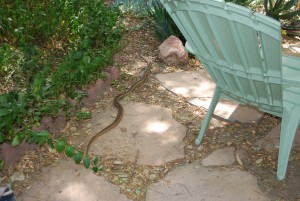 The snake was extremely focused in its endeavors and moved along to the edge of the patio.  As the snake came through it was moving its head back and forth and flicking out its tongue checking out the scents with its Jacobson’s organ. 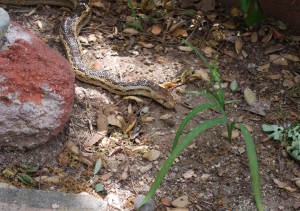 Using its tongue and Jacobson’s organ.

The photo below shows him stretched out.  I used this photo to get an accurate estimate of its length.  It was surely tracking something. Right after this photo he makes a bee line for an area where we had some things stored outside.  The bicycle tire gives good scale for the size of this snake. 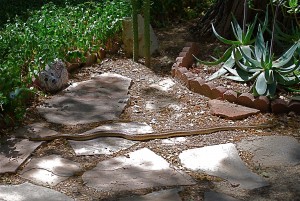 A full five and a half feet of gopher snake. 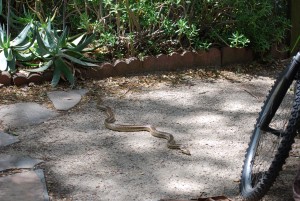 After the snake went into the junk pile,  I went into the house happy with my photos.  About twenty minutes later I came out to check on things.  I went out without my camera as the junk pile was not good photographic material and I already had lots of great photos. As I went to check on the pile I noticed a motion down to my right. It was a baby bush cottontail rabbit squirming around in the clutter.  The snake had been following the trail of the baby rabbit!  Instinctively I picked up the rabbit since it was so small and helpless.  It immediately started squealing for its life!  I let it go outside of the yard.  There was no sign of the snake so I went back in. After about another twenty minutes I went back out to check, again without my camera. Low and behold there is the snake all coiled up right where the baby rabbit had been! And I, without my camera!  Oh well, I had a good story.  However, it does not end there. Five years later, in 2014, I believe that he was here again.  I have really nothing to go on but for his size, which is enormous! 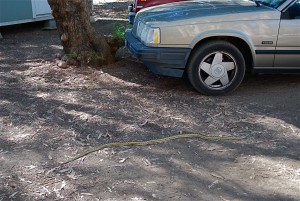 One day last November, 2015, there was a turkey vulture sitting on a small electrical pole eyeing the field below.  It had been flying around very low, searching.  Turkey vultures are one of the few birds with a sense of smell and locate what they eat with it.  Condors, which cannot smell, will look for turkey vultures circling around food. 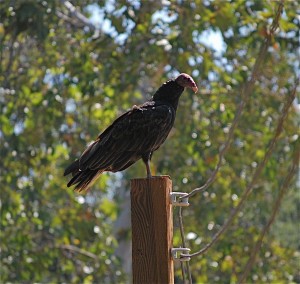 It had been flying around here for a couple of days.  It eventually dropped down into the field southeast of me.  After a bit I saw it dragging something so I went in to get my spotting scope which is just inside the door ready to go.  It was obviously pulling on something very large!  The scope showed it to be a snake, a very large gopher snake! 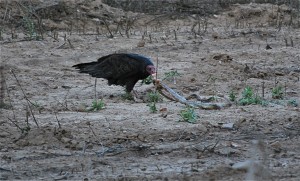 It is surely big enough to be the one that I had seen before.  In the photo to the right the head of the snake is closer to us on the right. Turkey vultures are very large birds which again shows how big that snake was.  I have no idea how that snake died, except that it probably was not a predator because they would have eaten it, not the vulture. 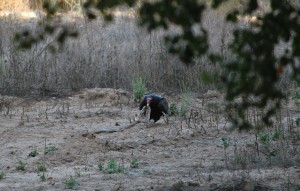 Turkey vulture with gopher snake. The snake’s head is the short end.

I would expect that the snake had a long and happy life, given its size and the area it lived.  All things in our natural world have an expiration date, including the planet.  That is surely a big part of our desire to explore space.  Of course that’s if we don’t destroy our planet first!

3 thoughts on “A Gopher Snake Saga”