During a very long hot spell in February of 2016 that had the lizards out of their usual winter torpor, I came out of the house to rejoin my wife and backpacking friend Harvey at the table in our north yard.  As I approached the table Harvey pointed out two western fence lizards that he presumed to be mating. Many years back, while on a backpacking trip together in Los Padres National Forest, I had made note of two alligator lizards we came across who were mating. The male grabs the female behind the head to keep her from getting away while mating.  I looked over to the Bluebellies, the common name for western fence lizards in these parts, and saw that it was actually two males and they were fighting each other!  Male western fence lizards maintain territories and will defend them vigorously.  The males will send signals from a distance that consist of doing push-ups with their body puffed up and showing their gular sack under their throat from a high spot in their territory.  These displays do a couple of things, first they advertise to males to stay away and they also show them to any females who might be around and willing to mate.  If there is to be a dispute between two males, they will start approaching each other sideways, standing as tall as they can, puffing out their bodies and gular sacks while curving their tails up and over their backs, if they still have a tail.  Of note here is that western fence lizards can release their tails in order to get away from predators. When the tail is released it is regrown with cartilage rather than bone, as the original was.  Because of that, the tail never fully regrows to its former size. 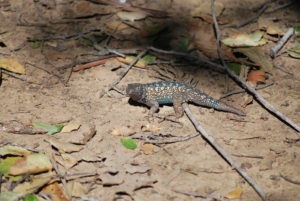 This is Stumpy, one of the brawlers.

Lizards can also lose their tails in their fights with each other.  As a matter of fact, I have seen dislocated shoulders and missing digits from their feet because of the battles they have.  As they approach each other sideways, they will switch which side is facing their opponent so their heads face in opposite directions.  Sometimes these encounters last only a minute or less as one of the  combatants will sense that it is not big enough or bad enough to win and will run away. Other times it turns to hand to hand fighting.  Usually these last just a few minutes with the smaller,weaker one running away.  This particular encounter was going to prove to be epic! 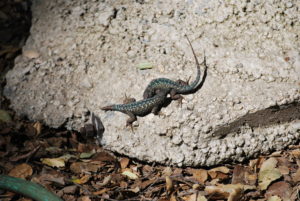 Stumpy and his opponent moving in!

I had wanted to wash my car, but the two males were fighting around where the hose was laying, so I decided to give them a little time to work things out.  I didn’t want to roll the hose over them washing the car.  Well, the fight went on for about fifteen minutes and I really needed to wash my car so I went over to them in order to break up the fight. We had been feeding these lizards by hand for a long time and they were quite comfortable around us (one of the benefits of feeding by hand).  My approach to the lizards did nothing to quell their battle. 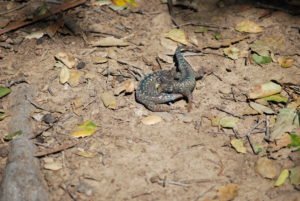 The long tailed one seems to have Stumpy’s rear leg in its’ mouth.

With the lizards at my feet, I reached down and picked up Stumpy.  To my amazement he was very warm in my hand.  Reptiles are of course cold blooded and I had never handled a warm reptile.  I was somewhat worried that they would succumb to heat exhaustion.  I returned Stumpy to the ground, and they resumed their contest.  At this point I realized that I should be getting photos of the action, so I went in and grabbed the camera. Sometimes the lizards will bite on the sides of each other and sometimes they try and grab a leg.  When they have a good hold on their opponent they will often roll and flip much like an alligator does with its’ prey. 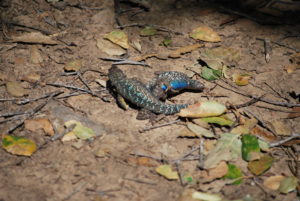 I ended up taking 61 photos of the lizards battling it out.  This process took about another fifteen minutes and that, added to the original fifteen minutes, had them fighting for a full half hour!  I have witnessed many, many Bluebelly fights and never has one gone on longer than a few minutes at best.  This encounter was incredible and truly epic! What was most incredible though was holding a warm reptile!  I doubt that I will ever experience that again, but hey… who knows?