All through my blogs you have seen my delight for feeding the critters around here.  In my blog, “Feeding the Wild Ones ,” I stated my preferences and fears for feeding the “wild” animals.  I do not put out piles of food for indiscriminate feeding.  It attracts some non-wanted animals.  I feed by hand, not just from my hand but also in a gentile toss out to them of their favorite food.  This does two very important things, first, I know who I am feeding in order to keep out the riffraff and second, it creates a whole different bond than just putting out a pile of food for them.  They make a very distinct connection as to where all this food is coming from, me!  I become an animal that sheds meal worms and walnuts, although I am not sure about the quality of that distinction yet.  I don’t want to be just a walking food bag!  With feeding by hand all the animals then lose their fear of us, my wife and friends feed also.  Because of this, even when we are not feeding them, they will come by us very close or pop up on the table to check us out a little bit before going on their merry little foraging rounds.  We get to see very natural behavior up close and personal! 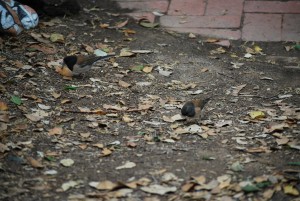 This winter we had a couple of winter visitors take the bait!  We had a small flock of three dark-eyed juncos arrive, normal winter visitors, hopping around us.  They forage on the ground searching for things to eat.  I actually got their attention with meal worms, more visible and they wiggle.  I then switched over to walnut pieces which are less expensive.  Today I had one of them up on the table with me.  However the real star was a hermit thrush. 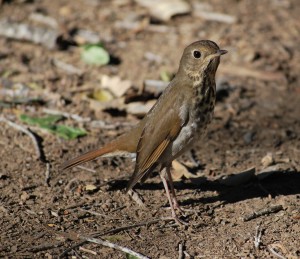 I had tried to get its attention last year, presuming it is the same one.  They do go to the same nesting areas so why not wintering grounds?  Only one time last year did it ever pick up any worms so it never focused on me.  This year I got to toss a few worms out to it with her focused on where they were coming from! Bingo!

She, I call her she because I want her to have maximum double clutches when she goes north to breed, proved to be fearless and bold.  By the morning of the fourth day she was flying over and taking worms from our hands!  She is the first bird to do that for us. 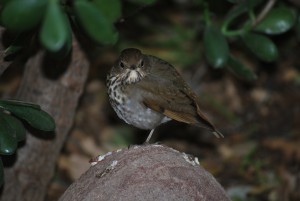 Patience patiently waiting on one leg.

Unlike other birds she would hang close by us on the rocks for long periods of time, standing like a shore bird on one leg.  The other birds would go off to forage and come back later.  She stayed tight to us and I named her Patience. 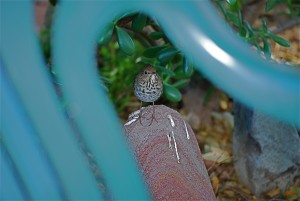 My view of Patience on the rock.

I was at the table one day peering at Patience through the opening in the arm rest and I had the odd thought, I have many of those, would she fly through that opening in the chair?  Hey, I got Slinker, aka Leo the Leaping Lizard ( see “Rare Reptiles”), to jump for his worms. Besides, I do not want to be known for just being a walking food bag.  I want some more bang for my buck… er, worms! 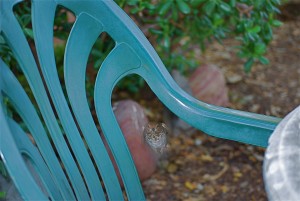 I positioned a worm so she could see it through the chair and to my amazement here she comes, right through the opening!  I had to use my flash to try and stop her movement, which resulted in her having a somewhat ghostly look. 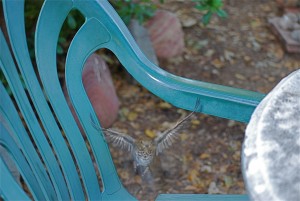 Patience flying through the arm.

Sometimes she would go back through the arm chair opening after taking the worm, showing some fine flying skills. I had the same odd thought that I had about Slinker, the whiptail ( see essay “Rare Reptiles”). Would she go on tour?  Some times she would flutter around in our face as we got the meal worms out. She was amazing! 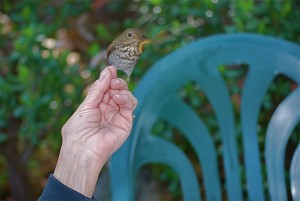 A bird on the hand is worth two in the bush… or something like that.

We were having a fabulous time with Patience until Agro, another hermit thrush, showed up. First, however, I will have to backtrack some. A few weeks after we had started feeding Patience another hermit thrush showed up while we were feeding her.  Patience immediately drove it off.  I was talking to another birder during the Christmas Bird Count and she said that she has three in her yard and they get along just fine. 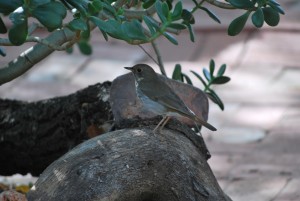 On the day Agro shows up I think, “cool one more hermit thrush,” so I attempt to feed him the first couple of days by tossing him worms, which he eats heartily.  The third day of Agro’s arrival I am feeding Patience with the “fly to my hand” technique.  While Patience is taking a worm from my hand Agro swoops in, right at my hand, and chases her off!  I immediately stopped feeding Agro, mostly because I hate bullies, but also because Patience was first and takes from my hand.

However, since Agro had already gotten some meal worms he has unfortunately stuck around . He also sees the other birds feeding and I’m sure he feels left out.  Agro does not bother the seed eating birds because I am feeding them nuts, which he doesn’t eat. If I was throwing out meal worms to them it would be a different story.  He would challenge for them.  Regardless, he continues to chase Patience off when he finds her here.  I do, however, still throw Agro a few worms.  Where are those friendly thrushes like my birding friend?  Patience has been able to continue to come by, although she really has to choose her spots.  All of a sudden she is there and able to eat a few worms before Agro chases her off.  I can also feed her on the southern side of my house without Agro seeing.  For a better understanding of this phenomena read Konrad Lorenz’s seminal work “On Aggression”.  I am sure we also have that aggression hard wired in us, at least from what I am seeing of the world.  After all, we are nothing but another animal on this planet.  Within a few weeks the birds will be leaving to go up to breed in the forest of the North.  We have not had a sighting of Patience for a few days as of this posting.  My main thought now is that, will she return here? Birds return to the same spots to breed, why not feed?  I fully expect, barring catastrophe, to have her fluttering in my face next fall.  She was clearly the star of the show this winter!