One of the really fun Citizen Science Projects I am involved in with Cornell Lab of Ornithology is their NestWatch project.  We in the project (it is open to anybody and they provide training) monitor nesting sites we can find.  All data is sent over the internet to the data bases at Cornell Lab so that professional ornithologists can study it.
The first hurdle is FINDING a nest.  One nest that is fairly easy to find is that of the black phoebe.  They have to have a lip or overhang to build their nest under and really like under the eaves of buildings.  In the wild they look for rock overhangs.  We have a pair of phoebes who love the eave under a workshop building our neighbors have. 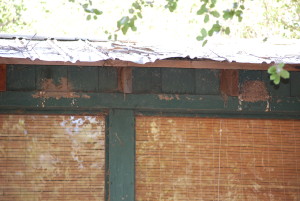 Black phoebes adhere a nest of mud pellets and plant fibers and line them with hair or other soft fibers.  They will tend to nest in areas they have had success in before, as is evidenced in the above photo.  The phoebes here seem to do pretty well, often having a second brood. 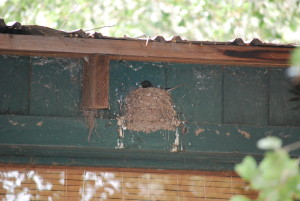 A parent incubating the eggs. 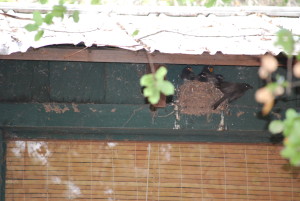 While all birds have preferred places they like to nest, they can be harder to find than the phoebes.  One of the things I use to help locate nests is to watch a bird’s feeding behavior.  When they start feeding the young they will have to bring food back to the nest.  Phoebes catch insects out of the air and fly back to the nest with them.  All one has to do is observe them for a while to find the nest. If birds are gathering caterpillars, the favorite food for nestlings for a lot of species, they will stack them in their beaks to bring back to the babies.  In years past we have had some little green caterpillars in the oaks that many of the birds have taken advantage of. This past spring I was feeding  one of our California towhees some mealworms, which I am fond of doing, and I noticed it was stacking them in its beak! 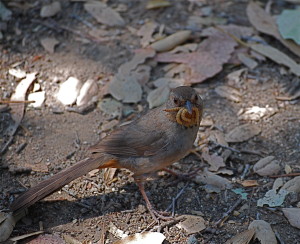 California towhee stacking mealworms in it’s beak for the nestlings.

That means NESTLINGS!  When it flew off I followed it around to the other side of the house, however I did not see where it went.  Within a few minutes it was back at my feet begging for more mealworms.  I fed it a few more worms and off it flew, about five feet away, to the nest! 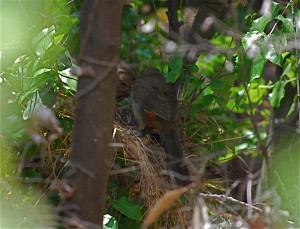 Parents at the nest.

California towhees generally nest within a few feet of the ground, although I did have one up about five feet in one of my large cactuses.  This one was about three feet off the ground in a fairly sparse shrub, quite out in the open.  There were three nestlings. 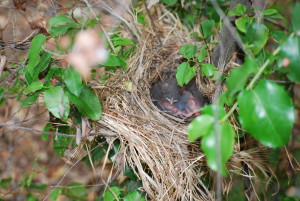 The nest did not appear to be solidly attached.  There was one end they seemed to favor when entering and leaving and it was quickly degenerating, as seen in the photos below. 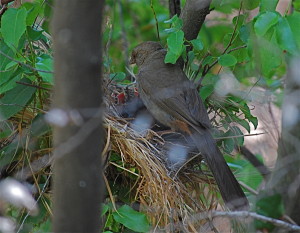 The nest deteriorating under a parent

Within a day or so I went out to find the nest very tilted and the babies on the ground.  I reinforced the nest as best I could and put the babies back in.  The next day when I awoke I noticed that I was not hearing the towhees as I had the previous days.  When I checked on the nest it was tilted again and the babies nowhere to be found.  There was also a spot of blood on the nest to suggest that a predator took them out of the nest. 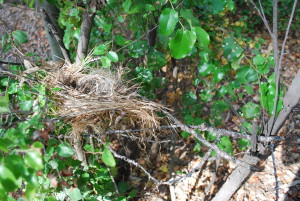 A small spot of blood on the far side of the nest.

A nest failure by predator is a common occurrence for birds and has happened quite often with nests that I have been monitoring, as stated in previous blogs.  It’s a bit of a bummer.  Unfortunately in the biological world we live in there is no such thing as a right to life, you have to earn it!