Living in an oak grove as we do we have our share of woodpeckers.  Our endemic acorn woodpecker is the most abundant with their total numbers probably being in the high teens.  We have northern flickers and occasional sightings of downey and hairy woodpeckers.  The red-breasted sapsucker is a constant winter visitor.  However, the one woodpecker species we have here that I have also been able to monitor, as to its nesting activities, is the Nuttall”s woodpecker.  In the spring of 2012 I found a nest, through the activity of the birds, located in the northeast corner of my yard.  It was in an old trunk of oak that had been cut at about four and a half feet high, with the opening of the hole at four feet.  That year the parents fledged two, a male and female. 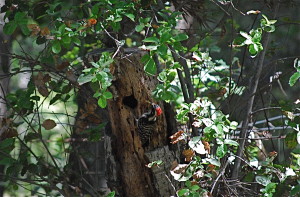 Male Nuttall’s bringing a grub, their favorite food, to the nest, Spring 2012. 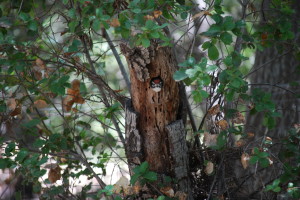 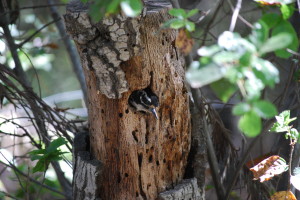 Last spring was my fist working with NestWatch, Cornel Lab of Ornithology, and while I had eight nesting attempts by six different species of birds, none were Nuttall’s. This spring I was out checking on a mourning dove nest that was being built in a eucalyptus tree by the south west corner of my house.  I was standing by the pepper tree on the other side of the driveway closer to the house.  I was hearing a lot of woodpecker tapping, however, my focus remained on the doves at hand.  One thing that did catch my eye was a bunch of wood chips laying on the ground by the pepper tree. 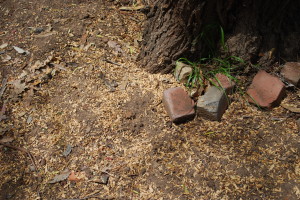 Wood chips at base of pepper tree from woodpecker excavation.

While I was inspecting the chips a motion in the tree caught my eye.  It was a male Nuttall’s and I realized he had been excavating a cavity to nest in.  Problem was, I didn’t see which hole he had come out of and the tree had a few of them.  That was soon remedied however because I can see the tree from my favorite chair in the living room!  Over the next couple of weeks I had a fun time watching the parents bringing food to the nest. 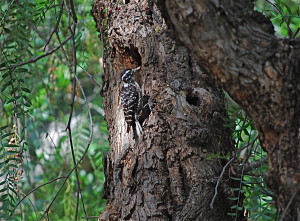 Female bringing a grub to the nest, Spring 2014.

However, what one puts in one end comes out the other and the parents had to take out fecal matter to keep the nest clean.  Birds in classical nest just poop over the side, which is not an option for cavity nesters.  I witnessed this same activity with the house wrens, also cavity nesters.  You have to keep your house clean for your baby! 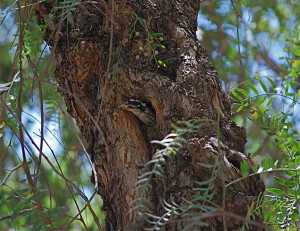 But mostly they just flew in and out with grubs and other insects.  Once the nestling got big enough to poke its head out I found that they had only one nestling, a male.  At least I never saw more than one head peering out at any time before they fledged. 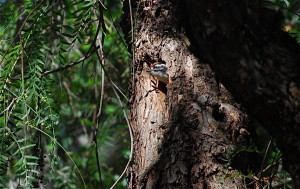 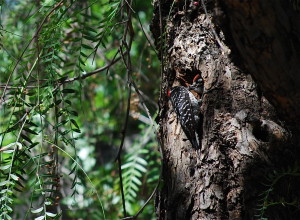 It’s always a joy to watch new life come into the world.  And it is not easy out there. Last year, of the eight nesting attempts I mentioned previously, five ended in failure! These birds produced!