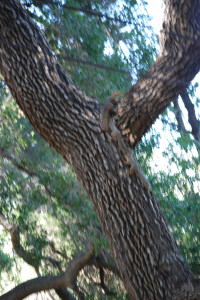 Precious’ three offspring from Spring, 2014, playing around in the oaks. 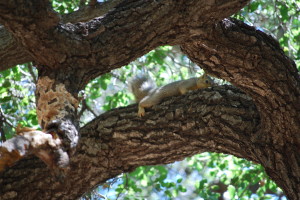 One of Precious’ offspring taking a break from the play.

Sally did finally show with her two youngsters hanging around. Apparently she had kept them on the north side of our yard. Precious brought hers over from the south.  The funny thing was, I expected the young to come over to feed with the moms just as Pito Boy (more on him in a bit) did with Sally last year.  They saw us feeding their moms but have been too skittish to come close.  Thank God! I did not want to be feeding eight squirrels!  I think the mothers both had multiple young because of our feedings.  They usually have one, sometimes two.  The size of their litters may have contributed to their not bringing their young in.  There would be too many mouths to feed for the given habitat.  Last year Mr. Pito was Sally’s only offspring so I think she let him tag along.  Precious brought no one.  This year the young seem to be foraging on their own, which may be their normal thing. 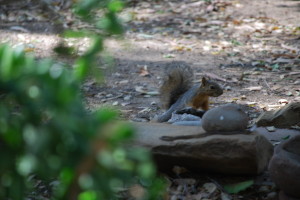 One of Sally’s young at the ground birdbath.

It has been really interesting noticing the changes in their markings over time.  As I stated in the captions of the previous blog of photos of Sally and Precious about one having a black stripe over its muzzle, I refer you to my previous post for those photos, things have changed.  Precious now has no real markings now while Sally has some black markings on her forehead back to her ears, which started out as a crescent shape from the forehead to each eye.  The one thing that has never changed has been their personalities.  Sally and Pito Boy are very mellow, coming in to feed without much angst.  Precious on the other hand comes in all skittish and jumpy.  I am thinking that is because this was Sally’s territory.  Although they are not suppose to be territorial there is a fair amount of chasing that goes on.  Whatever the cause, their personalities do show. 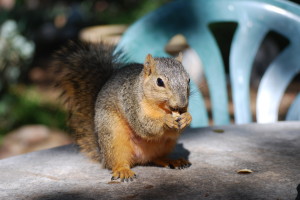 Precious with no real markings on her face. 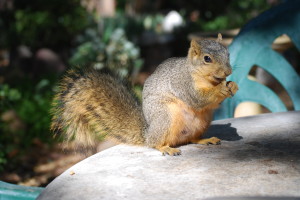 Notice the black markings on Sally’s head that go back to the ears and forward to the eyes.

It has been tough to keep them separated as to who’s who during the changes except for their personalities.  But one we always knew was Pito Boy.  As of this spring he is one year old!  And now he is called Mr. Pito, I’m sure you’ll see why. 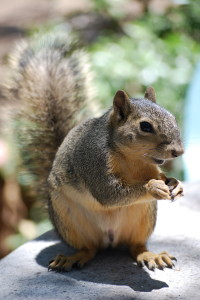 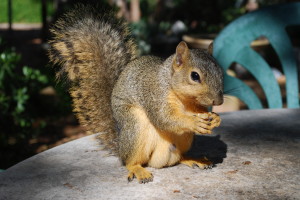 Our Squirrels
Predators and Prey