About two and a half years ago I decided to start learning the calls of the birds that I have here around the house.  I had never bothered to learn them previously for two reasons.  The first was that when I started birding, 37 years ago, I always wanted to see the bird not just hear it.  Not seeing the bird just seemed so unfulfilling.  The second was that trying to find a songbird flittering around up in the oak canopy or down in the dense chaparral is a pain in the but.  It just wasn’t worth the effort to me, besides, I wanted to see them.  Now that I live here in Paradise, that’s what I call my place, I thought I had a better opportunity to achieve some success with that endeavor.  I have a core of about 30 year round birds that I could start with.  I knew a few bird calls, some besides the obvious crows, scrub jays, owls, etc, but I wanted to be more aware of what was around me.  It wasn’t easy in the beginning, especially at springtime  when besides my year-rounds I had the influx of the spring migrants nesting.  Sometimes I could not even keep up with all the calls I was hearing.  But it was fun and I learned.  Now I do a lot of my birding by ear.  As I’m sitting at my “Birding Table” reading my paper in the morning I can keep a mental note of where the birds are around me without looking.  It also alerts me to new species in my yard or at least a new sound from an old bird.  Here’s the thing, birds don’t just make one sound.  They can have chip notes, calls and songs and sometimes they use incomplete calls.  I believe the crows are suppose to have a vocabulary of over 50 calls, however they all sound like crow.  Like anything though it gets easier the more you do it.   While my wife and I were sitting at the “Birding Table-North Yard” about five weeks ago we were hearing a call/sound that we could not identify.  It was kind of dove like but also sounded a bit like a small puppy whining.  There were some new people using the north pasture and my wife was worried that maybe a dog they had was in trouble so we investigated.  I was pretty sure it was a bird sound and wanted to know which one.  After searching as best we could without trespassing and not finding the source we returned to the table.  I went in for a few minutes and when I came out my wife tells me that a roadrunner has just come out of that area.  So back in I go and get my bird guide.  I had never thought about a roadrunner making calls.  The book says ” a descending dove like call”.  Now I go in and get on the computer and go to Macaulay Library (http://www.macaulaylibrary.org) which is a data base of bird calls from all over the globe, containing every bird that we are ever going to hear.  I believe it is open to the public.  It is connected to Cornel Lab of Ornithology.  I have only been using this site for about a year and I sure wish I would have had them available when I started learning the calls.  Anyway, the call we were hearing was definitely the roadrunner.

Over the next week the roadrunner is calling off and on all day.  It’s a male and he’s looking for a mate.  We see him make his calls as he crosses the pasture but a lot of his calls seem to come from three distinct angles a lot of the time.  The trippy part is, I can never see him.  So I reread the guide and it talks about the roadrunner being on the tops of mesas or cactus or shrubs when it calls.  OK, so next time I hear him calling from his southwest position I raise my gaze and there he is, 30 feet up on the top of a dead sycamore snag cooing away with a western skink in it’s mouth as a food offering!  I was a split second from getting a photo when he swooped down from his perch.  I did manage this one a few days later. 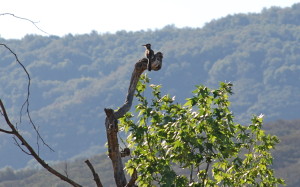 Greater roadrunner calling for a mate up on a Sycamore snag

A few days after that I heard him calling from the East and I started looking for him up in the oaks. It took a little bit but I found him about 35 feet up in a valley oak! We see roadrunners a lot here and they always seem so reluctant to fly. A section of pasture fence that the roadrunners can’t go through seems to baffle them. They will look up at it walking back and forth and then finally fly up over it, immediately returning to the ground having barely cleared the fence. To see them at the top of an oak really surprised me!

Greater roadrunner cooing away up in a Valley Oak

The roadrunner ruffles out his throat feathers and bends his head down when it calls.  That would explain why his calls did not seem to be coming from up high. A little ventriloquism there!  Anyway, I sure didn’t expect to be looking for a roadrunner in places I would be looking for a warbler!